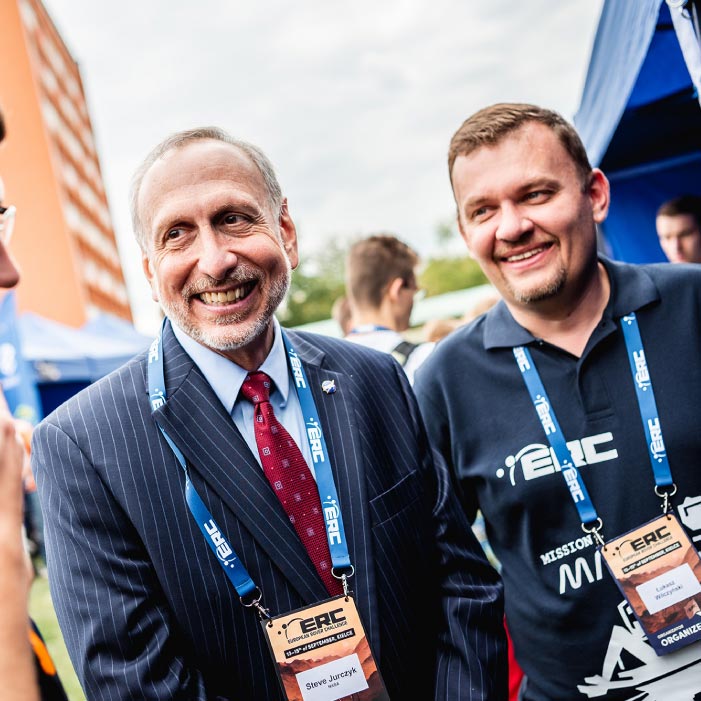 The ERC proves that in space, there is space for everyone – Lukasz Wilczynski

An interview with Lukasz Wilczynski,
President of the European Space Foundation

Preparations for the eighth edition of the European Rover Challenge have already kicked off. The ERC brand is now well known in the space and robotics industry, and every year the event is followed by hundreds of thousands of participants around the world. Has the project’s evolution been in line with your expectations since your team launched the first Mars rover competition in Poland?

It all started when, as a member of the Mars Society, I took part in the Polish teams’ preparations for the Mars robot competition in the USA. In 2013, after several years of having various points of contact with this event, we came up with the idea that it would be worthwhile to create a similar competition for young engineers, but supplemented with two major features. First of all, we knew that our event had to be open to the public. Naturally, such competitions are of great scientific importance and often prove to be a turning point in students’ careers. We, however, saw something in it no one else did then: an excellent opportunity to amaze the broad audience with technologies that they have so far known only from sci-fi blockbusters.

Secondly, we invited media representatives and industry professionals to create a universal meeting platform together. The ERC has been visited by such authorities as Harrison Schmitt of Apollo 17, ESA’s astronaut Timothy Peak, and NASA Associate Administrator Robert D. Cabana. Having an opportunity to attend high-profile conferences with such figures is out of reach for most student teams. We connect them directly here.

When we laid these plans out in 2013, we knew our goals were ambitious and it would take a tremendous amount of work to achieve them. Today, I can honestly admit that the effort has paid off. The ERC is exactly what we wanted – an international scientific event with industry leaders that opens the career doors for the contestants and gets the audience hooked on science and technologies.

What were the biggest challenges in organizing the first ERC in 2014, and what are they now, seven editions later?

The Mars rover competitions typically aim at a relatively narrow and specific audience, so our biggest concern in 2014 was whether we will be able to attract contestants. We set the bar high for ourselves by opening up to the entire world. We got as many as nine teams from four countries and for the first edition I think it was a very good result. Preparing the terrain was also a challenge since we don’t have suitable desert areas in Poland that resemble the Martian landscape (not in the way the Utah desert does, anyway). We had to design and literally build the MarsYard ourselves.

The ERC has grown so much now, as has the dedicated team overseeing its organization, so the excitement and potential difficulties are utterly different. We no longer have to worry about whether the event will happen at all, but instead can focus on polishing the details that make each subsequent edition superior.

It’s clear that the ERC is a powerful source of inspiration. What drives your passion in this project?

There are three key areas of the ERC that I draw inspiration from. Invariably over the years, it has been our contestants. Students from all over the world come to Poland, bringing incredible stories. For example, during one of the editions, the team from Nepal faced an earthquake in their homeland. They perceived their input in the competition as a chance to create constructions that will possibly help save lives during comparable incidents in the future. Stories like these keep me motivated to keep developing the ERC because they prove its relevance.

The second component that deeply inspires me is our guests and their stories. And I mean both the big names in the industry who visit us and people at the beginning of their careers who share the same huge passion for science and space. I often catch myself listening to their talks over and over trying to absorb as much experience and wisdom as possible. I felt privileged to have the opportunity to shake hands with dr. Robert Zubrin from the Mars Society, to whom I owe my passion for space. A memorable highlight was also the ERC 2015 and the visit of Harrison Schmitt, a member of the Apollo 17. The day I spent with him was a dream come true for me as a historian and author of a thesis on the Apollo mission. Many inspiring people get involved in the ERC every year, including Artemis Westenberg, CEO of Explore Mars Europe, and Maria Antonietta Perino of Thales Alenia Space. Naturally, it’s impossible to mention all wonderful guests who visit the ERC. There are so many of them!

I’m guessing the third source of inspiration for you is the Inspiration Zone and the visitors. Why do you think the ERC is worth attending?

That’s right! The third motivator for me is the outreach to the general public that the Inspiration Zone provides each year, thanks to our exhibitors. The most important value of the ERC is that it gives everyone a chance to explore new technologies and meet people like the NASA Associate Administrator or an active astronaut in person to ask them questions.

First-class specialists meet ambitious students here and visitors of all ages, among whom we find people not even associated with the industry but passionate about science and technology. The youngest are a particularly valuable group of our viewers. The idea of a child starting dreaming about going to space after meeting an astronaut is the best proof that we did our job well – because we have instilled in them the motivation to pursue their dreams.

What pushes people into space is the unknown. Whether you’re a scientist, a humanist like me, an engineer, or somebody else – you can participate in discovering new worlds. Like I always say, “In space, there is space for everyone”.