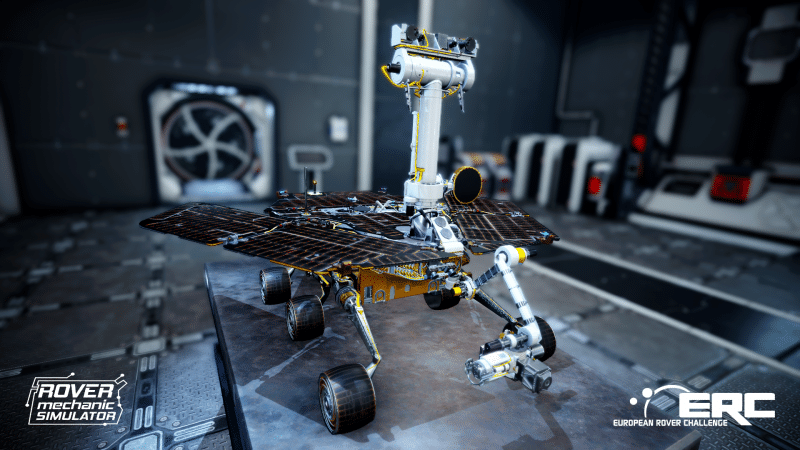 Launch of the latest game from Pyramid Games on ERC 2019

During this year’s European Rover Challenge finale, visitiors can expect many unusual evnts. One of them will be the premiere of beta version of Rover Mechanic Simulator – a game produced by the Polish studio Pyramid Games.  The latest version of the game will be available at a stand prepared by the studio.

Rover Mechanic Simulator is an arcade and logical game in which the player plays the role of a mechanic repairing Martian rovers so that they can continue their exploration missions of the Red Planet. It is the second production of the studio from Lublin and is a kind of tribute to the Opportunity Rover, whose mission ended in 2019.

When NASA announced that the Opportunity Rover mission officially ended on February 13th, we were all very sad. We thought it wasn’t fair that the Rover was to stay broken on Mars forever and we decided that if there was anything we could do to bring him (and other Mars rovers) back to life, we would do it! – claim Creators of the game.

Rover Mechanic Simulator is not an easy game. The mechanics of the game extremely faithfully reflects the real world, where every smallest detail matters. The player can, for example, disassemble parts extracted from the interior of the robot into smaller components, which will later undergo separate maintenance in order to save resources for more difficult tasks. During repair work, players can use tools located in the workshop, such as: 3D printer, soldering iron, crusher, or crane, which can also be developed during the game.

This is not the only reflection of reality that we will find in the game. Creators give players the opportunity to work on existing Martian robots, such as Sojourner, Spirit, Opportunity, and later they plan to add the Curiosity Rover and other landers that have reached the surface of the Red Planet . Their models, components and mechanics were developed on the basis of documentation made available on the Internet by NASA. Each robot has a different difficulty level and the player gets access to the next rover as they advance to the next game level.

Rover Mechanic Simulator was created as a spin-off to the previous studio’s game – Occupy Mars, in which the player plays the role of a settler exploring the surface of Mars. Their task is to survive and develop a new civilization in the face of unfriendly circumstances of nature, which destroys their shelter and resources, but also their own weaknesses. During the game, the player decides on every aspect of the game: what their shelter will look like, how they will gain resources, or how they will move. Success depends not only on the proper development of the Red Planecian civilization, but also on the satisfaction of basic needs: food, drink, sleep and, most importantly, oxygen.

Occupy Mars, like the Rover Mechanic Simulator, will delight gamers with its refined details and advanced, complexed technologies they will have to use to survive. As a reward for their efforts, Mars explorers will be given the opportunity to freely explore the surface of the Red Planet.

Both games will be available for purchase on the Steam platform, where both of them already made it to the Steam Global Top Wishlist. Both Rover Mechanic Simulator and Occupy Mars will be available in the early access option. The creators emphasize that it is extremely important for them to involve players in the whole process of creating the games and that they count on the comments about the game’s performance from those people who have already had the opportunity to try the game.

Pyramid Games is a computer game development studio founded in 2012. Their headquarters is located in Lublin. They say about themselves: “We are players and we love to create games. Our goal is to provide the best possible quality in our games. We are also passionate about science and science fiction! Our upcoming games focus on discovering the unknown and acquiring knowledge. Our studio will take players back and forth to Mars, teach them how to become a NASA engineer or show them the interesting work of a palaeontologist.

You can learn more about Pyramid Games and their projects at their website: https://pyramid.games and below You can watch sample video from Rover Mechanic Simulator