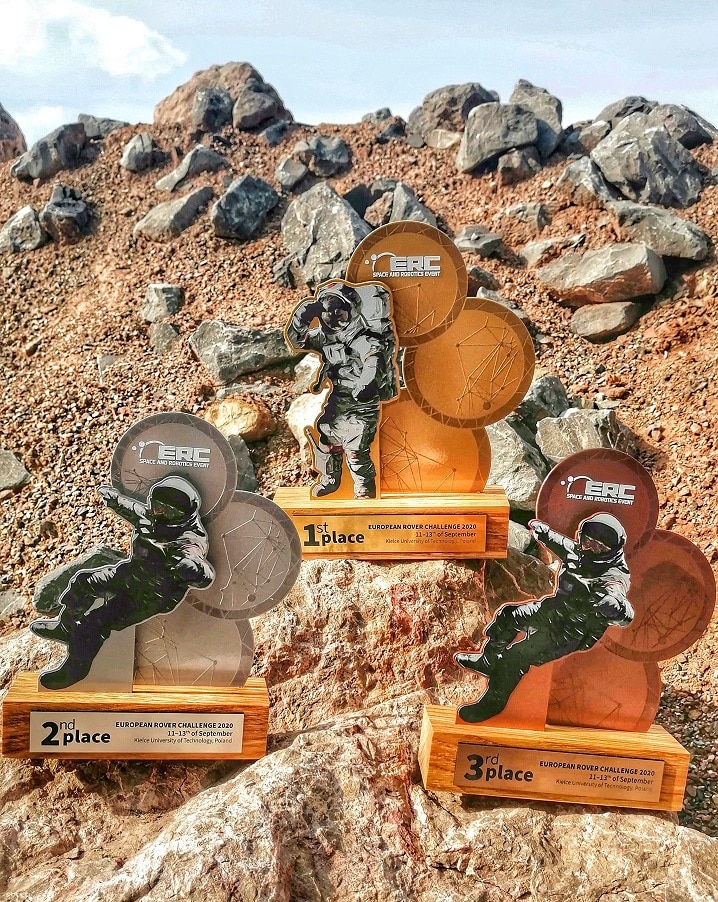 Germany with a golden medal at ERC 2020

The ERIG e.V team from Germany is the winner of the sixth edition of the international Mars rover competition ERC Space and Robotics Event. The Czech RoverOva was just behind them, and the bronze medal was won – for the first time in ERC history – by two teams: DJS Antariksh from India and Robocol from Colombia. In this year’s final of the competition, 26 teams from 14 countries of the world competed against each other.

Sixth edition of the ERC competition was held in a completely new, hybrid formula. The participants, connecting from their countries, remotely controlled the robot moving on the largest artificial Martian track in the world, built in Kielce. Teams took part in two field competitions, reflecting the tasks performed by rovers on the surface of Mars.

Each year, we observe an increasingly even level among the players, which is reflected in slight differences in the final scores. We are glad that the teams approached the new formula of the competition with such enthusiasm, presenting in their preparations meticulousness and professionalism. This is best seen in the example of this year’s winner, who showed an in-depth analysis and interdisciplinary approach to the project at the stage of creating the documentation, for which he received the Best Design Award from us – says Łukasz Wilczyński from the European Space Foundation, the main organizer of the competition.

This year, for the first time, additional awards and distinctions were granted. RoverOva from the Technical University of Ostrava, last year’s ERC bronze medalist, was awarded for the most autonomous ride on the Martian track in the Navigation & Science Task competition. The representatives of Colombia prepared the most accurate geological map of MarsYard, and the DJS Antariksh team from India was awarded for the best scientific mission plan.

The judges also appreciated the skills of the UK team who demonstrated the greatest dexterity in the Maintenance Task simulating a remote repair of the reactor. In addition, ERC 2020 partner, Mathworks, awarded SKA Robotics from the Warsaw University of Technology a special award for the best use of its platform to perform advanced scientific calculations and computer simulations. The teams distinguished during the official Closing Ceremony joined the group of ERC 2020 winners by joining the winners of the Best Design Award announced in August this year.

The full list of the awarded and honored ERC 2020 teams is as follows:

The first ERC Rover Mechanic Challenge e-sports tournament based on a Mars rover repair simulator has also been settled. The participants played the role of mechanics in one of the first colonies on Mars, and their task was to maintain Martian rovers using available tools and resources. The winner of the tournament was Ishat Raihan Jamil, who was awarded the opportunity to travel remotely on the ERC Mars track by a rover.

ERC 2020 is the only space-robotic tournament to take place this year after the declaration of a pandemic. This year’s edition, in addition to the international competition of mobile robots, also included the Science and Technology Show Zone intended for the general public, a mentoring and business conference including six discussion panels on trends in the space and robotics sector, and the ERC Rover Mechanic Challenge e-tournament.

The honorary patronage over the event was taken by the European Space Agency, the Ministry of Development, the Minister of Foreign Affairs, the Poznan Supercomputing and Networking Center and the PIONIER National Science and Research Network. Kielce is the Host City of the event.