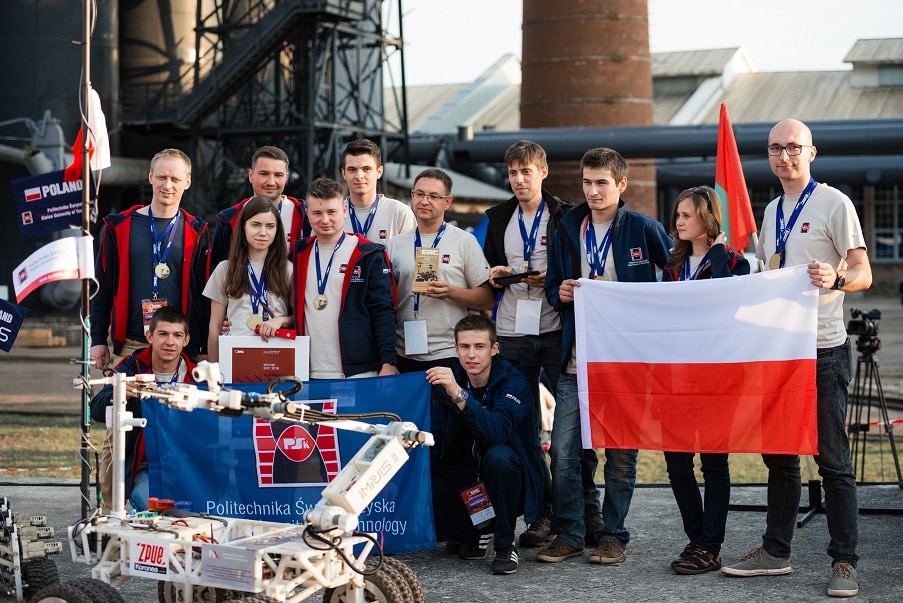 The fourth edition of the international robotics competition has come to an end. This year the European Rover Challenge turned out to be a record one in many aspects: more than 400 constructors from six continents, distinguished world astronautics icons gathered in one place, crowds of visitors and the biggest science and technology show zone in the ERC’s history. The best teams came from Poland, Canada and the Czech Republic.

There were 35 teams from 20 countries that qualified for the European Rover Challenge. For several months they worked hard to make a fully functional Mars rover modelled on the existing Curiosity Rover or the ExoMars Rover, which is to be deployed to Mars in two years. During the ERC they took part in five competitions which aimed at demonstrating their rovers’ full potential and how they could be remotely controlled:

Competitions in the field were open to the public so everyone had a chance to see the teams’ spectacular and exciting struggle in the Mars Yard and support their favourite teams.

Best of the best

The tasks were performed under the experienced eyes of the record number of jurors: 13 engineers and planetary geologists from the leading companies representing the Polish and international space industry followed the rovers’ every move in the Mars Yard. The best team this year was Impuls from Kielce University of Technology, followed by the team from Łódź (Raptors from Lodz University of Technology) and the Canadian team, Robotics for Space Exploration from the University of Toronto. During the closing ceremony there was also the jury’s award presented to the Czech team, RoverOva from the Technical University of Ostrava, which made its debut at the ERC this year. The complete teams ranking can be found below. With every edition the European Rover Challenge is growing, also thanks to the competing teams, which we note with great satisfaction. The fact that Kielce University of Technology, which came second in the previous edition, turned out to be unbeatable this year, is the best example of what ERC is all about – paraphrasing Neil Armstrong’s words – a giant leap for a space career – says Łukasz Wilczyński, President of the European Space Foundation, the organiser and mastermind of the event.

The winners of this year’s edition of the European Rover Challenge will have an opportunity to take part in the prestigious analogue mission, AMADEE-2020, organised by the Austrian Space Forum in the Arabian Peninsula in 2020. The robot made by the Impuls Team from Kielce has become the official rover of this mission and the team members will be involved in the whole cycle of field missions in the Mars simulators. During the closing ceremony the main award was presented to the winning team by Willibald Stumptner – Director of the Austrian Space Forum responsible for the AMADEE-2020 mission. The teams who stood on the podium also received cash and material prizes.

PRO FORMULA, which the organisers introduced this year, has also turned out to be a success. For the first time in the history of the European Rover Challenge professional constructors of Mars rovers could come to the event and take advantage of the Mars Yard to check how their rovers behave in the conditions similar to those on the Red Planet without competing. It was also a perfect opportunity to meet such icons of the world astronautics as Gianfranco Visentin, Maria Antonietta Perino, Dr Robert Zubrin and Artemis Westenberg.

The first British in space

In this year’s edition – similarly to all the previous ones – meetings with special guests were immensely popular. Tim Peake’s lecture about the six months he spent in the International Space Station attracted hundreds of  listeners, including those youngest ones who were not afraid to ask the guest questions after the meeting. The British astronaut also met with the contestants and commended them for their persistence, passion and ambition in reaching their goals. Everyone who qualified for the ERC final should be applauded for the hard work they did to be able to be here and compete in the challenge. With your innovative ideas and perseverance you set new boundaries in the development every day. This is also the best definition of what we do in the space industry on daily basis –said Tim Peake.

The ranking of teams which qualified for the finals of the European Rover Challenge 2018.

European Rover Challenge is the biggest robotics and space event in the world. The fourth edition was co-organised by the European Space Foundation, Starachowice Special Economic Zone, Starachowice county and Mars Society Polska. The honorary patronage over ERC was taken by the European Space Agency, the Ministry of Science and Higher Education, the Ministry of Entrepreneurship and Technology, the Ministry of Digital Affairs, the National Centre for Research and Development, the Polish Space Agency, the Polish Space Industry Association and the Polish branch of the Institute of Electrical and Electronics Engineers (IEEE). More information about the event: www.roverchallenge.eu.