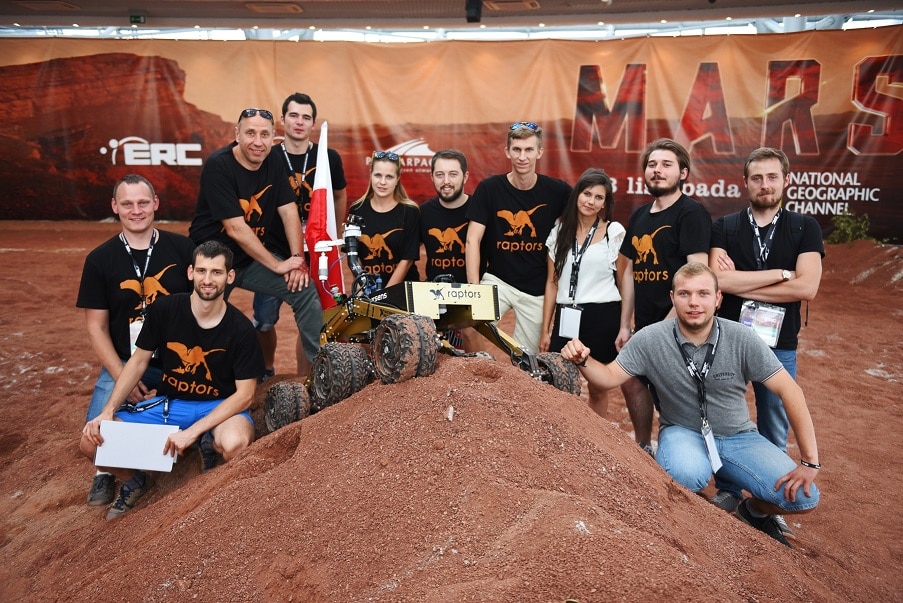 “Space business means huge money, most up to date scientific discoveries, future of our planet, but also its everyday life, since space technologies are used in inconspicuous places such as kitchen” – says Lukasz Wilczynski, the CEO of European Space Foundation and the founder of ERC. “These annual meetings are not only important international robotics and space related events, but also places where knowledge and experiences are exchanged. Attending ERC also means being able to learn the possibilities of the development of one’s career in the space sector” – he adds.

During the event, the 3rd edition of ERC Mars rovers competition took place – a part of Mars Society’s Rover Challenge Series. Teams designed and built rovers, which competed in competitions simulating Mars exploration. 400 constructors from all over the world arrived at the competition and 23 teams from countries such as Poland, Canada, Bangladesh, Turkey, Australia, Nepal and India, fought for the main prize. Raptors team from Lodz University of Technology from Poland won the competition, Impuls team from Kielce University of Technology from Poland took the second and Canadian students from McGill University, Montreal completed the stake. Starting this year, the competition became a part of the world robotics league, which means that all teams competing will gather points in Rover Challenge Cup. In the end of the season, the best robotics team in the world will be announced.

Apart from Mars rovers competition, this year’s edition saw a serious debate about the future of space exploration. Thanks to the European Space Agency’s debate, we learned what space is for ordinary people. Debate took place in 22 countries simultaneously and 2000 people, who do not have anything to do with space sector, took part. 60 people attended the international debate in Podkarpackie. European Space Agency wants to consider these opinions in planning future activities.

The space sector is growing more and more significant for global economy. According to American Space Foundation, its global revenue in 2015 amounted to USD 330 billion. Therefore the conference organised on 12 September was one of the key parts of the event. During the conference, members of ministries, government entities, businessmen and scientists, discussed the development possibilities of the space sector. And they were the first to learn the details of Polish Space Strategy.

The Polish Vice Minister of Economic Development – Jadwiga Emilewicz, presented the details of the strategy on 12 September in Podkarpackie. She outlined the long-term (up to 2030) development directions of the space sector in Poland. “Space sector is one of the most innovative and technologically advanced areas, which has a growing meaning on European and global economy. Therefore, we think that supporting this sector is particularly important” – said Jadwiga Emilewicz, Vice Minister of Economic Development.

Most important bullet points of the strategy presented by the Minister:

Piotr Dardzinski, State Undersecretary in the Ministry of Science and Higher Education also discussed the importance of science in Polish Space Strategy. Wladyslaw Ortyl, Podkarpackie Voivodeship Marshall, explained why so many important persons from the industry gathered in his region. “We managed to create friendly atmosphere for the investments in aviation and space sectors. As a result, we have been steadily attracting brands that are leaders in these sectors” he said.

Internships for the best

Another important part of ERC was the announcement of an internship programme, which fits perfectly with Polish Space Strategy. “Space sector, like any other segment of high tech economy, requires highly trained staff. The Industrial Development Agency JSC realises its mission to support innovation and meet the arising needs. Therefore, IDA JSC in cooperation with Polish Space Industry Association, announces a contest for the young engineers under the “Space sector staff development” internship programme umbrella.” said Marcin Chludzinski, CEO of IDA JSC.

The chief assumptions of the internships are training the space sector staff, developing young scientists’ careers and supporting knowledge transfer between universities and space sector companies.

Mentoring workshop, that took place on the last day of the congress, combined all the congress topics in one place. After struggling on the biggest Mars yard, young constructors had the opportunity to learn how the space industry functions, how to get funds, how to apply for internships. Mentoring workshop focused on project commercialisation. “The participants of the competition already have technical knowledge” concludes Wilczynski. “We would like to help them get into the world of business with this knowledge”.

ERC is not only business, knowledge and the competition. It’s also about workshop and exhibitions for broad audience. “Popularisation of science is part of European Space Foundation and The Mars Society mission” says Łukasz Wilczynski. An exhibition zone was open throughout the congress. There, experiments, workshops and presentations for wide audience took place. Screenings of movies such as “Europe reaches the stars” brought big crowds.

Symposium entitled „Astronaut Preparation for Long Duration Space Flights” was also organised. Six analogue astronauts presented the results of first Polish test mission as well as an atlas of meteorites, they prepared during the mission. That’s just a small part of the attractions planned for broad audience. Over 20 thousand attendees took part in the abovementioned events.

Teachers who attended ESERO workshop will spread the knowledge about space further. They familiarised themselves with the educational scenarios created for the purposes of teachers from middle and high schools, by the experts from European Space Agency. “Mission accomplished” says Lukasz Wilczynski after these four, exciting, cosmic days.

ERC is Europe’s largest space and robotics event addressed to the representatives of science and business sectors, new-tech, students and the general public, powered by The Mars Society. Up to date all editions of the event were attended by over 70,000 participants. ERC is organized by the European Space Foundation and Podkarpackie region. The honorary patronage over the 2016 edition was taken by the Poland’s Ministry of Development and Ministry of Science & Higher Education, European Space Agency, National Research & Development Centre and the Polish Space Agency.