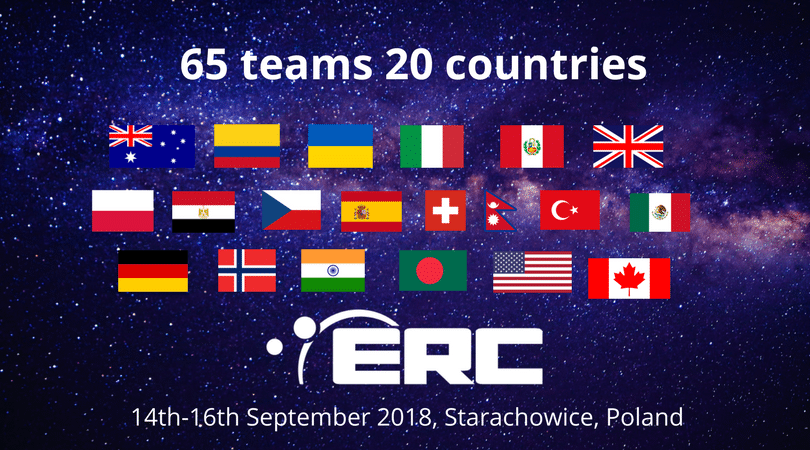 Double record of applications for the European Rover Challenge 2018

There are 65 teams from 20 countries that have applied for the participation in the fourth edition of the international Mars rover challenge – European Rover Challenge. The organisers have received competition documentation from teams representing such countries as Germany, Great Britain, India, Italy, Canada, United States, Poland, Norway and Mexico. The final will take place on the 14-16th of September 2018 at the Museum of Nature and Technology in Starachowice, Poland. The patronage has already been taken by, among others, the European Space Agency.

– For the team members the European Rover Challenge is a unique opportunity to present their skills and an important step in building their career in the spacer sector. Therefore, we are very happy with the fact that we have teams from as many as 20 countries who present different approach to space robotics – says Łukasz Wilczyński, the event organiser – The emotions during the challenge will also be guaranteed by the demonstration of power of teams from Europe whose number has grown compared to previous editions – they constitute almost a half of all the registered teams.

A new thing in this edition of ERC is the PRO formula which gives teams that deal with robotics and space technologies professionally an opportunity to present their possibilities. This is an additional reinforcement of the ERC’s role as a platform to present and evaluate potential technical solutions  in the tasks inspired by the scenarios of NASA and ESA robotics missions.

European Rover Challenge is one of the biggest international space and robotics event in the world. It gathers not only specialists in planetary robotics and Mars rovers designers but also representatives of science and business as well as the new-tech sector. ERC attracts general public interested in the development of science and new technologies for whom an educational science and technological show zone has been prepared. The previous editions of the event were attended by more than 70,000 visitors and more than 700 designers from all over the world.

ERC is organised by the European Space Foundation together with Starachowice Special Economic Zone, Starachowice county, Museum of Nature and Technology in Starachowice and The Mars Society. The honorary patronage over the challenge has been taken by the European Space Agency, Ministry of Science and Higher Education, Ministry of Digital Affairs, National Centre for Research and Development and Polish Space Agency. The ERC’s partners so far include MathWorks, DPS Software, Sinterit, IEEE Polish Chapter as well as Mars Planet and Austrian Space Forum as concession partners. The PR services for ERC are provided by Planet PR.