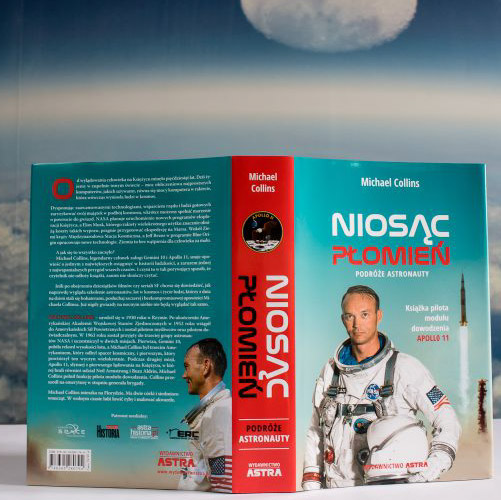 We are more than happy to inform you that ERC had taken patronage over the Polish edition of Michael Collins’ book ” Carrying the Fire: An Astronaut’s Journeys”, which was published by Astra publishing house.

With advanced technologies, support from the government and people ready to risk their wealth to conquer space, we can soon fulfill our dream of returning to the stars. NASA plans to launch new moon exploration programs, and Elon Musk, whose reusable rockets will significantly reduce the cost of such expeditions, wants to prepare an expedition to Mars. The International Space Station is circling the Earth and Jeff Bezos is developing new technologies with Blue Origin. The Earth is undoubtedly not enough for humans.

But how did it all start?

Michael Collins, the legendary Gemini 10 and Apollo 11 crew member, tells the story of one of the greatest achievements in human history and one of the greatest adventures of all time. And he does it in such a captivating way that the reader will not put the book away until he has finished reading.

If, after watching dozens of films or SF series, you want to learn what it’s like to train astronauts, fly into space and live the lives of the people who have become heroes overnight, listen to Michael Collins’ honest and uncompromising story. Never again will the stars in the night sky look the same.

Michael Collins was born in 1930 in Rome. After graduating from the U.S. Military Academy in 1952, he joined the U.S. Air Force and became a fighter pilot and test pilot. In 1963 he was admitted to the third group of NASA astronauts and participated in two missions. The first, Gemini 10, broke the flight altitude record, and Michael Collins was the third American to take a spacewalk and the first to repeat this feat many times. During his second mission, Apollo 11, famous for its first moon landing, in which Neil Armstrong and Buzz Aldrin also took part, Michael Collins was the pilot of the command module. Collins retired as Brigadier General.

Michael Collins lives in Florida. He has two daughters and seven grandchildren. In his spare time, he likes to fish and paint watercolors.”

(Distributor’s text on the back cover of the book)

Premiere of the book “Carrying a flame. Astronaut’s Travels” took place on 20.07.2019 on the 50th anniversary of the man’s landing on the Moon. This is the first in a series of books devoted to the conquest and exploration of space by man, provided by the Astra publishing house. The series will also include publications: “Apollo 13” by James Lovell and Jeffrey Kluger, “Apollo 8” by Jeffrey Kluger and “Man on the Moon – Apollo program” by Andrew Chalkin.