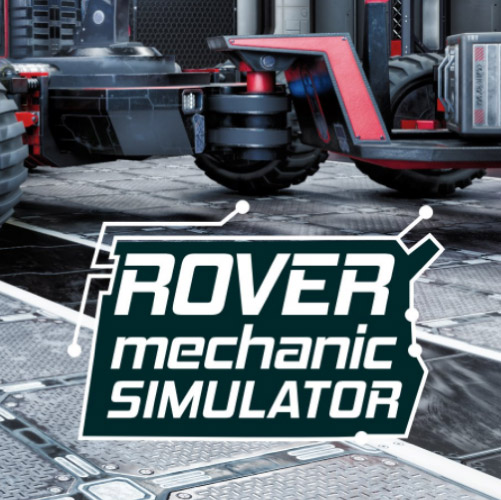 Last year at ERC You had the opportunity to test the beta version of the Rover Mechanic Simulator game from Pyramid Games studio. Today we want to inform You about it’s debut on the Steam Platform. ” Become a crew member of one of the first Mars colonies, responsible for repairing and maintaining Mars rovers, and help achieve success with the Mars mission” – invite creators of the game.

Pyramid Games, the developer and publisher of Rover Mechanic Simulator, is happy to announce that Steam Early Access version of the game is launching today. If You had been excited about the Pathfinder Mission, had watched the Spirit rover take the first Martian selfie, or if you are waiting for a safe start of the Rosalind Franklin rover and other rovers this year, we have something for You.

The Rover Mechanic Simulator is an interesting proposition for fans of space and technology. It is worth mentioning that it is created with the support of ERC.In the game You are a mechanic working in one of the first Martian colonies. Your main tasks include  repair and maintenance of Mars rovers, so that the remaining members of the crew can use them to collect detailed information about the structure of the planet.

There are many devices at your disposal that will allow you to dismantle and maintain even the smallest of parts. Use different tools such as a 3D printer, recycling machine, overhead crane, soldering iron and many more. In the later stages of the game, You’ll be able to upgrade them, making Your work even more enjoyable and effective.

Not all parts need to be replaced entirely. You can use special workbenches to repair damaged PCBs or clean and maintain parts that have worn out during rover’s work. This can help you save resources for much more difficult tasks.

Decide what kind of mechanic You would like to be. The game offers you several development paths that you can choose from. Are You a tinkerer who enjoys disassembling devices into small parts? Become a technician! However, if You prefer to precisely analyze damaged parts and find malfunctions faster, then becoming an analyst would be a perfect choice for You. If You want to master the recovery of resources, You should follow the economist path.

There are many devices on Mars which served people in the past, but broke down at some point. You can fix and restore them back to service. Thanks to you they can keep on performing their tasks by sending specialized information about the composition of the Red Planet. “Spirit”, “Opportunity” and others have served people for years and they can still do it!

Gain experience, earn higher ranks and take on more complex tasks. The future of humanity on Mars rests on your shoulders!

▲Pyramid Games is a game development studio founded in 2012. Our main office is located in Lublin, Poland. We are gamers and we love making games. Our goal is to deliver the best possible quality in our games. Our upcoming titles: Rover Mechanic Simulator, Dinosaur Fossil Hunter, Occupy Mars: The Game.