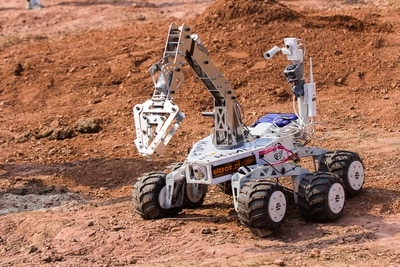 Extended formula, mentoring workshops and the induction to a world robotic league are differentiations of the third edition of the European Rover Challenge. The event, which is the largest space – robotics event in Europe, will be held from 10-13th September 2016 in the Exhibition and Congress Centre in Jasionka (Podkarpackie Voivodeship).

During the ERC 2016 apart from the competition and science and technology demonstrations zone, which are known from previous editions, there will albo be monetoring workshops  for competitors and exhibitors. Lectures and practical classes will be related to, among others, technology development, project financing and building the image. During the event, you will be presented a special raport on potencial and competence of the Polish teams participating in robotic competitions around the world.

This year, the competition for the constructors of Mars robots will be held in a new location – Exhibition and Congress Centre in Jasionka, the largest and most modern facility of its kind in the region.

We are glad to be hosts of ERC 2016 which fits perfectly into the strategy to promote the region as a place of innovation and encourage the development of new technologies – says Wladyslaw Ortyl, Marshal of Podkarpackie Voivodeship – The event will be a platform for exchange of experiences between business and science and it will create a community of people open to the challenges of unconventional thinking.

The novelty relevent with the event is  the induction of Rover  Challenge Series – the most prestigious league of robotic competitions in the world. Its purpose will be to raise the rank of the competition, international cooperation in terms of their organization and the extension of the idea of the competition to other continents in the near future.

The series will be composed of European competitions, held in Poland, its American equivalent – University Rover Challenge and smaller, closed national competitions – says Lukasz Wilczynski of the European Space Foundation, the organizer of ERC 2016 – League will be managed by the global organization of the Mars Society. All teams, starting in individual competitions, will earn points in the Cup Rover Challenge and at the end it let emarge the best team in the world – Wilczynski adds.

More information on the European Rover Challenge is on the website: www.roverchallenge.eu