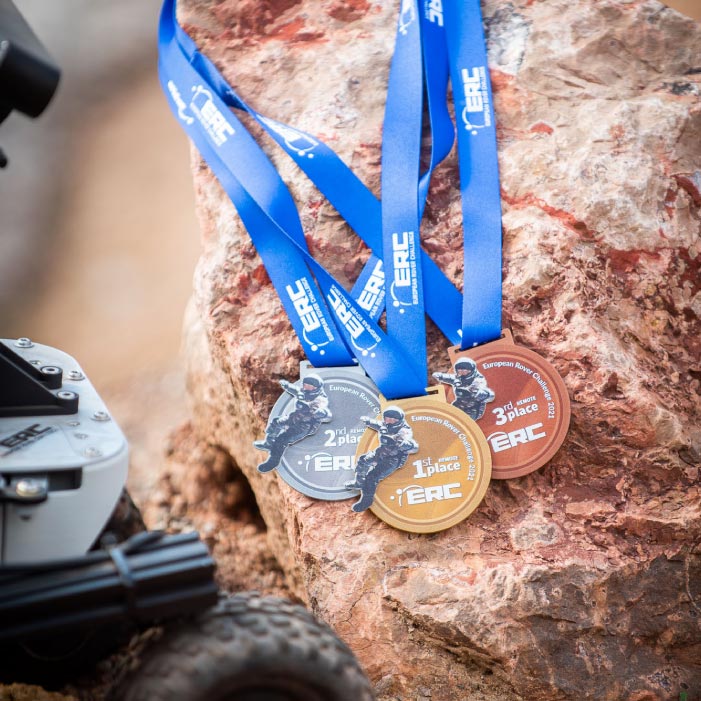 Article by Lukasz Wilczynski,
President of the European Space Foundation

When I recall the ERC 2021, I have three moments in mind that are particularly important to me, as they were associated with exceptional emotions.

The first was the formal briefing with a group of several dozens of partners, organizers, and volunteers, at which we would usually meet in the evening, the day before the event started. There is an atmosphere of the highest readiness, and the stress associated with the organization is mixed with the excitement that soon we will see the results of our yearlong work. Our team consists of people from many different cities, and although many of them work together on a daily basis, we only have the opportunity to see each other in person once a year, so it is a special time for us.

The second key moment for me was seeing the ERC bustling with life. This year we had teams back on the Mars Yard, and the event was held in two formulas – on-site and remote, bringing together a total of 38 teams and hundreds of competitors from around the world. Their commitment and fight for the best outcome until the very end proves how important it is for them to participate each year. Another thing that stuck in my memory was the 8K connection with the Ars Electronica Festival in Innsbruck, during which we gathered a vast number of robots on the Mars Yard. Smaller and larger vehicles, built from different materials and based on many diverse engineering concepts gathered in one place – that’s the essence of the ERC. With the world’s largest Martian active volcano, lava canals, or caves, the Mars Yard itself was the most advanced we had prepared to this point. We also had a fantastic Inspiration Zone with a busy agenda of workshops, demonstrations, and meetings with scientists and engineers. Thousands of people of all ages visited the site, including those who participated online – the ERC 2021 attracted nearly half a million viewers! The industry discussion, divided this year thematically into Earth, Mars and the Moon, featured more than 60 prominent speakers, including Robert D. Cabana – NASA Associate Administrator, Dr. Robert Zubrin – founder of the Mars Society, Professor Chris Welch from the International Space University, as well as representatives from European Space Agency, Polish Space Agency, European Union Agency for the Space Programme, Explore Mars, Polish Space Industry Association and many others. The whole event was accompanied by a number of inspiring side events, such as an e-sports tournament based on the Martian rover mechanics simulator from Pyramid Games or a NASA photo exhibition.

The culmination of the ERC 2021 and perhaps the most touching moment for me and all competitors was, of course, the closing ceremony. We were able to take a sigh of relief to see the massive success that our months of work had turned into and how rapidly every aspect of the event has evolved. Once again, we proved that the ERC is a pioneer in combining remote and hybrid forms of competition. The complexity of the broadcast and the diversity of channels to target our audience worldwide allowed us to reach a record number of science and technology enthusiasts. The Inspiration Zone elevated to a higher level, involving great science advocates from several countries. The attendance of NASA executives and other key industry companies and organizations made it clear that the ERC is a significant international event that you can’t overlook.

We want to thank our participants, Co-organizers, and Partners, as well as Honorary Patrons, Strategic Partners, Supporting Partners, the City of Kielce, Media Patrons, and everyone else who contributed to the tremendous success of the ERC 2021.