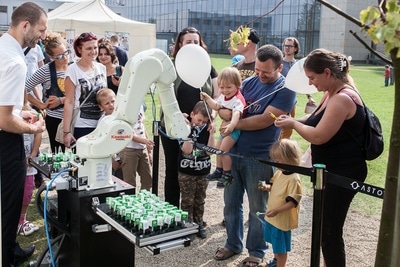 A record number of applications for the European Rover Challenge

This year almost 40 teams from twelve countries have a chance to compete in the second edition of the European Rover Challenge, an international competition of Mars robots which will take place in Podzamcze near Kielce. Among the competitors there are: the American Yale University, multiple laureates of the American edition of the competition from the Białystok University of Technology or the last year laureates of ERC from the Kielce University of Technology and the Cairo University. The competition will be judged by experts from the European Space Agency.

This is certainly a record in the history of similar competitions around the world where the second edition garners such a high number of interested teams. Thus, it is now a fact that the European Rover Challenge became appreciated as a prestigious event as University Rover Challenge in United States – says Łukasz Wilczyński from the European Space Foundation, the organizer of ERC.

The competition will be held on 5-6 September 2015 on the premises of the Regional Science-Technology Centre in the Świętokrzyskie province. The goal of the teams is to build a robot that will compete in simulated navigational, geological and field Mars tasks. The competition is accompanied by the Science and Technology Picnic during which companies and institutions will present the latest achievements in the fields of science and technology.

Last year’s edition of the event attracted more than 25 thousand spectators to RSTC. It is also a great opportunity to present the diverse educational portfolio of Science Centre Leonardo da Vinci which commenced its operations during the first ERC – says Marcin Perz of the Regional Science-Technology Centre, co-organizer of the event. This year we have also prepared workshops for teachers, conducted in cooperation with ESERO – European Space Agency’s education office.

We will now verify the submitted technical documentation of the constructions of the teams entering ERC 2015. Materials will be assessed by experts in the space sector. This year the head of the department of robotics of the European Space Agency and Prof. Giancarlo Genta from the Politecnico di Torino, an expert in the field of robotics, will join the jury – says Piotr Wenclewski, head of the jury. They will be aided by Polish experts in the fields of remote sensing, satellite navigation and planetary geology.

The ERC competition will be preceded by the Space Days Poland business conference. The goal of which is to combine the interests of the space sector with companies and institutions from various industries that are interested in establishing trade relations, transferring the developed technologies or experiences in project management. The Ministry of Economy is the patron of the events. The partners of the events are: European Space Agency, Polish Agency for Enterprise Development, Świętokrzyskie province, Mars Society Polska, Planet PR and Trio Conferences. The organizers are the European Space Foundation and the Regional Science-Technology Centre from the Świętokrzyskie province.

Full list of registered teams can be found at www.roverchallenge.eu